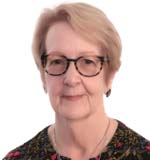 Ms. Siggins began her aviation career with BOAC in 1973 as secretary to the Catering Manager. She later transferred to the airport, where she worked in all aspects of passenger service and operational functions. It was during this time that BOAC amalgamated with British European Airlines to form British Airways.

Ms. Siggins received qualifications for aerodrome oversight, safety management services and auditing (including ISO9001) with ASSI in the UK, the FAA in Oklahoma and International Civil Aviation Organization in Montreal. At Cranfield University in the UK, she was certified as an Accident Investigation Manager for Bermuda. Ms Siggins retired from BCAA in 2019 after 14 years.